The Band Has Gears: Atom and the Volumes – EP 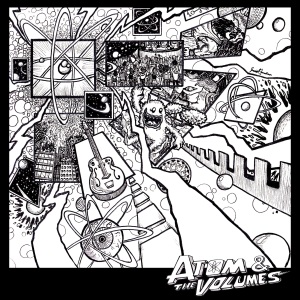 Toronto’s Atom and the Volumes’ self-titled EP comes across as built around the idea that the best music feels just like closing your eyes and dancing. The band could be the spawn of Wilco and Failure, a cocktail of raw emotion, storytelling and unexpected flourishes.

“Pointed Pins” is a brooding garage anthem topped with 80’s glam metal flare. The fuzzy, whirling guitars lend the pop-sensible chorus an edge like bacon on maple. “Lick Your Tears,” about a corroding relationship, has the slowest tempo on the album and is at least twice as angsty; the short wah-wah riff that reappears throughout the song evolves into a  comment on the dangers of repression. The playing thickens at about the two and a half minute mark, becoming stronger than the sum of its parts, and you’re liable to be blanketed in sound.

“Boardwalk,” sultry and distant, floats along on an almost country-western twang from both strings and singer. Any Toronto flâneurs looking for a soundtrack best have a listen.

“To The Beat” typifies something to look forward to on future Atom and The Volumes releases: the band has gears. Mellow groove can morph into full-on jam session at the hiss of a cymbal.

The outro’s called “Ultimate Power Question” and its suggestion about what fuels human progress and creativity will have you paying close attention to your hips.

Get the full scoop here: Atom + the Volumes.