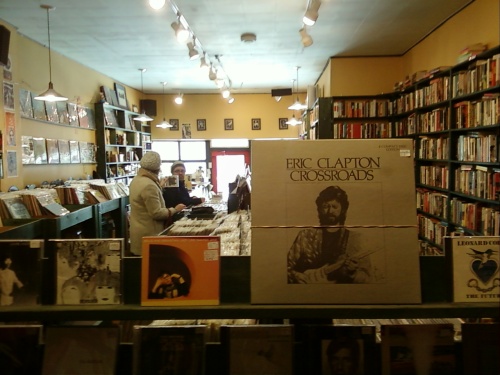 From the Toronto Review of Books

She Said Boom! takes its indelible name from the first song on Toronto post-punk band Fifth Column’s All-Time Queen of the World. It has two locations (393 Roncesvalles Ave and 372 College St), under separate but amicable ownership, that serve two very different communities. The College store is close to Kensington Market and the University of Toronto so it caters to younger customers, mostly college students, while the Roncesvalles store gets more young families and people from Parkdale.

The storefront sign at She Said Boom! Roncesvalles is proof that written explosions are just as eye-catching as hot ones. Open since 1999, it’s one of the first businesses in Toronto to sell both books and music. “The reason was largely accidental,” says owner John Bowker. “I wanted to open a record store, and my partner wanted to open up a book store, and neither of us were able to pay the rent on a full store by ourselves. I remember wondering whether people would be willing to shop for books in a store where loudish, non-classical music was playing. Turns out, books and music worked very well together. And so obviously Chapters and Indigo stole our idea. Now Indigo sells candles.”

Read the rest here: Portrait of a Record Store: She Said Boom! Roncesvalles.